Letter to Academics in Education, Language/Literature, Linguistics, Psychology, and Philosophy

“Even as the history of our discipline is implicated in systemic racism, such modes of inquiry remind us of literature’s capacities for critique, resistance, and transformation.  We resolve to pursue those capacities across all areas of literary study.” J. Brantley, English Chair, Yale University.

Psychologists change cognitive activities to change emotions (Greenberger & Padesky, 2016; Prinz, 2004). But is your favorite character (fictional or biographical) driven and makes decisions emotionally by what they feel or cognitively by what they think; that is, does cognition or emotion change the biology that drives an artist, a researcher, a political activist, or character in a book, play, or movie? What is the linguistic illusion of destructive and aberrant emotions in science and evolution vs. Homer and Shakespeare vs. religious text of the world?

For the last fifteen years I have been campaigning for a paradigm shift that our children be taught the necessary cognitive/emotional skills, abilities, and gymnastics to maintain their own mental health, prosperity, and well-being that lies within a scientific, rather than within an erroneous literary and religious foundation of emotional dysfunction theory. Emotions-as-Effect Theory paves the way for science to begin this fundamental education within our schools, cultures, and societies on this planet.

By maintaining the illusion of emotional dysfunction and the need for emotional control (Gross, 2014) and management, the evolved function of emotional biofeedback in cognitive development, behavior, and decision making for health, prosperity, and well-being is short-circuited and the words, linguistics, and language of others have a greater ability to dominate, manipulate, and mislead decision making and behavior. Emotion-as-effect theory hopes to correct this unjust and false emotional linguistics foundation within the human psychic and reintegrate the evolved role of the emotional biofeedback mechanism as a necessary executive function in cognitive development, behavior, and decision making for an individual’s health, prosperity, and well-being.

I hope you understand my thesis and its importance for the future of education. I am constantly working on my messaging and welcome any suggestions. The abstract and diagram of the cognitive-emotional flow process follows and a PDF of Emotions-as-Effect Theory: The Linguistic Semantics of Emotional vs. Cognitive Regulation (11000 words) can be found on https://emotional-evolution.com/.

Note: Maintaining the status-quo of an emotional dysfunction theory that demands emotional regulation and management (even with the use of pharmaceuticals) is like a walk into Plato’s cave. A lifetime of secular, and perhaps religious, learning, using, teaching, and possible research within a belief of emotional driven behavior and decision making has hardwired (neuroplasticity) a reflexive neurocircuitry erroneously devoted to emotional dysfunction theory. For any one person to accept another cognitive/emotional dynamic requires a brutal commitment to science and logic.

Emotions-as-effect Theory: The Linguistic Semantics of Emotional vs. Cognitive Regulation

“Goddess, sing me the anger, of Achilles, Peleus’ son, that fatal anger that brought countless sorrows on the Greeks and sent many valiant souls of warriors down to Hades, leaving their bodies as spoil for dogs and carrion birds: for thus was the will of Zeus brought to fulfilment” (Homer, 800-700/2009). With these beginning words written almost 3000 years ago, Homer’s Iliad linguistically sabotaged hundreds of millions of years of emotional evolution. The civilized arena was staged for aberrant emotion driving destructive behavior. In turn, this destructive behavior arising from emotional dysregulation and disorder required emotional regulation and control. Emotions-as-effect theory reconstructs the evolutionary bases of good- and bad-feeling emotions as the perception, by consciousness, of a biochemical physiology within the body and the brain precipitated by an evolved and nurtured cognitive neural circuitry. Emotions, feelings, and moods are perceptions of an internal state of biology precipitated by cognition. Homer’s emotions, feelings, and moods are a carefully nurtured neurolinguistic cognitive construct of the mind. Contrary to the linguistics of Homer, emotions are not causal, and they are neither destructive nor constructive; rather, they are indicators of the presence of very real destructive and constructive – and causal – cognitive behaviors. The correlations among (1) cognition, (2) a healthy, vital, and robust biochemical physiology of the brain and body, (3) good- and bad-feeling emotions, and (4) consciousness are a result of millions of years of evolutionary survival for the health and well-being of the individual. The question is, how will today’s ever-changing technical and political cultures and societies understand, nurture, and develop these same necessary correlations?

Medoff, 1979, Children of a lesser God. (Play) Retrieved from https://en.wikipedia.org/wiki/Children_of_a_Lesser_God_(play) 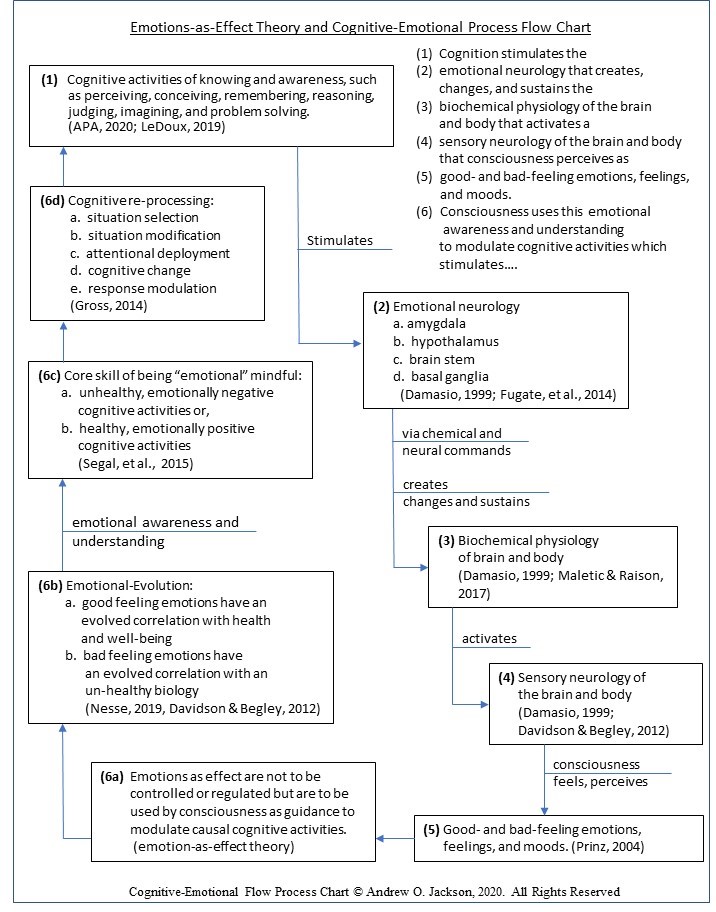 If law is ignorant of what drives human behavior and decision making, how can there be but laws of ignorance and injustice (and disorder, conflict, and crisis). Justice founded upon falsehood is itself false and unjust.