Star Trek’s Spock and his Vulcan heritage of powerful emotional being that must be controlled through logic is resurrected on Earth with psychology’s cognitive behavior therapies (CBT) which are designed to reign in aberrant emotions that drive dangerous behavior. But is this causal nature of emotions logical? Emotions are felt. That is, emotions (moods, and feelings) are the perception of physiological states and changes within the brain and body we feel. We feel anger, we feel love, we feel joy, all which have some corresponding biochemical and physiological state.  If, like Klingons, we are driven by our emotions, then logic would conclude that emotions precipitate the physiology that drives behavior and is then perceived as emotions.  That is, emotion is causal to the physiology we perceive as emotion. But can emotions be both causal to a physiological state and being and simultaneously be the effect of that same physiology? Is that logical? Is the emotional psychology of Spock and modern science fiction erroneous? The reason vs. emotion debate is an illusionary, albeit dangerous, cognitive construct of the mind. Emotions are the perception of a biochemical physiology precipitated by the individual’s cognitive activities of awareness and knowing. These cognitive activities include thoughts, memories, perception, imagination, and logical reason. There is no emotion vs. logic debate because emotions are a function of cognitive logic (see figure 1 below). 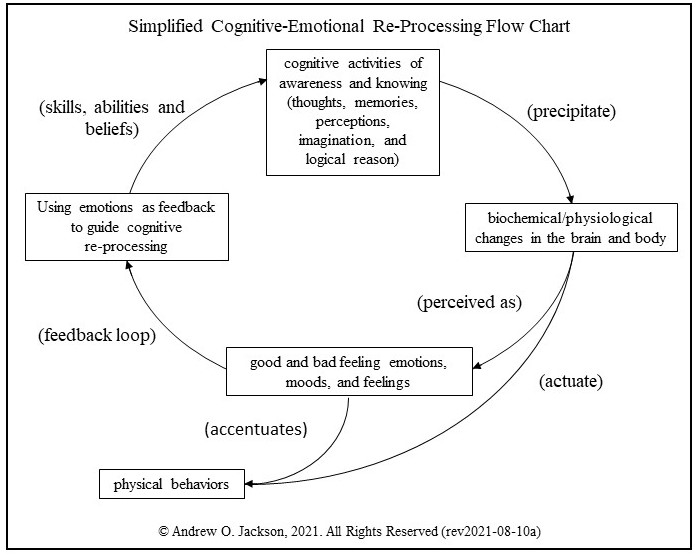 If I come across a thanator in the woods on Pandora (like the one that chased Jake over the waterfall) fear triggers a fight or flight response of dilated pupils, a racing heart and the quickening breath as the body prepares me for action. Or does it? Before an emotional response can be activated, I must first perceive the thanator, understand that it is a thanator, and realize that a thanator is very aggressive, and because of her size and ferocity, can easily put my life in danger…. “Run! Definitely, run!” Cognitive activities of the mind precipitate the changes in the biochemistry and physiology of the brain and body that are perceived as emotion.  Emotion is a result, a perceived effect, and cognition is the cause.

The evolutionary significance of emotional behavior can only be realized by incorporating the most fundamental property of emotions; emotions, moods and feelings feel good, or not. Joy feels good. Anger does not. Love feels good. Hate does not. Feels “good” or feels “bad” has important physiological significance. Good feeling emotions (moods, and feelings) have evolved to correlate with a healthy physiology. Bad feeling emotions (moods, and feelings) have an evolved correlation with an unhealthy physiology.  The essence of evolution is that those behaviors that promote survival to the next generation will prevail. If eating, breathing, or other necessary internal and external survival behaviors and instincts cease to exist or brought about extreme pain, sorrow, and anguish, wouldn’t this favor extinction? If dwelling upon that which is wanted and desired were painful, would we work for its creation? If dwelling upon that which is not wanted brought pleasure, would it no longer be undesirable? If feeling good correlates with lethargy and confusion, would confidently crossing a raging river remove this abstraction from the gene pool? Or in the modern scenario, would a drunk confidently getting into his car to drive across town during rush hour traffic survive? These are but a few scenarios that illustrate how good feeling cognitive-emotional behavior has evolved to correlate with health, well-being, and success for the future survival of a species. Continual negative feeling cognitive-emotional behavior will only lead to an unhealthy physiology and contribute to a person’s sickness and demise. Humanity has evolved to be joyous. In fact, it is a necessity of life. Continual ignorance of our cognitive-emotional evolutionary heritage only sabotages individual, cultural, and societal prosperity and well-being.

Emotions, as a feedback mechanism is the essence of “emotional control” as used in engineering control logic. The temperature in a room is “controlled” with a thermostat that manipulates the furnace (or air conditioner) to increase or decrease temperature of the air flowing into the room. The same control concept applies to the cruise control on a car. The speed of the car is “controlled” by the manipulation of other variables within the system that increase or decrease the power output of the engine.  Speed, temperature, and emotions are controlled by manipulating other processes within the system.  Speed, temperature, and emotions are a result, an effect, of the system and used as feedback to manage the system. The perception of emotions by consciousness is the result of physiological changes within the brain and body precipitated by cognition and used to guide and manage those cognitive activities for the health, well-being, and success of our organic system of consciousness.

The reflexive action of a hand on a hot stove from pain (or the potential realization of pain) protects the body. Emotions have a similar role to accentuate cognitive activities that bring about good feelings and to negate disharmonious and emotionally painful cognitive activities. Because dwelling upon that which is wanted and desired feels good and dwelling upon that which is not wanted, nor desired, feels bad, cognitive behavior, with emotional feedback, can be used to re-process negative feeling thoughts, memories, perceptions, imaginations, reason and other cognitive behaviors into positive feeling cognitive activities. Every effective psychological therapy uses emotions, moods, and feelings to re-process, re-organize, and/or re-establish new cognitive beliefs, logic and behaviors that lesson emotional dissidence and increase emotional harmony.

The essence of problem solving is understanding the negative emotional feelings when focusing and dwelling upon that which is not wanted and the positive emotional feelings when focusing and dwelling upon that which is wanted. The cognitive activity within each mode is creating a vortex of interconnected synaptic neurology within the brain linking thoughts, memories, perceptions, imagination, and logical reasoning into a network that not only reinforces its own reality but creates a barrier for the existence of the other, opposing view. A person living within their negative world must understand that the answers to their problems that don’t feel good lies within the vortex of emotionally positive, good feeling cognitive activities.  They must work and put in effort to develop their skills, abilities, and beliefs to escape their emotionally negative reality of the not-wanted and reach for the emotionally positive world they do want and desire. Their negative world which was so real yesterday, with a different neurology built today, no longer exists tomorrow.

The erroneous cognitive construct of emotions driving behavior and the need for emotional regulation, management, and control as used in literature, science, law, and philosophy has dominated modern “civilization” since Homer’s “Iliad” where, nearly 3000 years ago, Achilles’ anger “brought countless sorrows…and sent many valiant souls of warriors down to Hades….” Historically, the mind has linguistically combined (1) cognition, (2) bodily changes, and (3) any resulting behavior into one cognitive driving force called emotions, moods, or feelings. Our educational institutions have only reinforced this construct beginning with a child’s literary education, which is further reinforced through more advanced readings and continual indoctrination within the likes of Star Trek’s Spock, Star Wars’ dark side of the force, and Dune’s emotionally driven madness where there is no oneness of heart and soul for our good feeling emotions, moods and feelings to reach and to act from. Yet there is potentially great educational value within these emotionally charged and entertaining roller coaster rides.

Through the many lives and deaths within each play, experiences, understandings, knowledge, and, potentially, wisdom of others may be gleaned for the benefit of one’s own life and reality. The efficacy of these dynamics will be greatly increased without the awareness that emotions have evolved to guide cognitive behavior for the health, well-being, and success of the individual. Literary education must include the linguistic semantics of emotional driven behavior for its experiential value and growth potential within the vicarious living of others (be they real or fictitious) and the linguistic semantics of emotional control behavior in the engineering sense where emotions are used as feedback to guide the thoughts, memories, perceptions, imaginations, and logic of the cognitive mind for the individual’s well-being.

Authors’ (of all genres) failure to realize that the “suspension of disbelief” and avoidance of critical thinking includes the suspension of an emotional biofeedback mechanism that has evolved for millions of years to not only protect an individual but to promote their health, well-being, and success.  Spock’s reality of emotional control and suppression through logic and reason contributes to a mental/emotional world of suicidal depression and psychotic mania within a reality of wars, mass shootings, bombings, murder and individual dehumanization where people and politics have become objects to be controlled, manipulated, and subjugated for the personal greed and satisfaction of a dominate and power-hungry “race” of tyrants. These tyrants are now vying for economic and political control of our beloved planet called Earth. Poets, playwrights, and novelists have the power to brighten the future of humanity through their own awareness and application of an evolved cognitive-emotional dynamic system and with a new psychology of “emotional control”. Our emotional biofeedback mechanism has evolved to not be controlled by cognition, but to guide cognitive re-processing behaviors because there is a oneness, soul, and heart of creation that can only be realized by logic and emotion working together in symbiotic harmony, an archetype that current literature, religion, science, law, and philosophy can easily fail to recognize.